At the end of the hackathon, all mentors were asked to vote anonymously for several prizes. There were 2 categories in which each mentor had one vote to cast. The winning team has been awarded a hardware price sponsored by Nvidia and HZDR.

The vote in this category ended with a tie, i.e. two teams won unexpectedly. 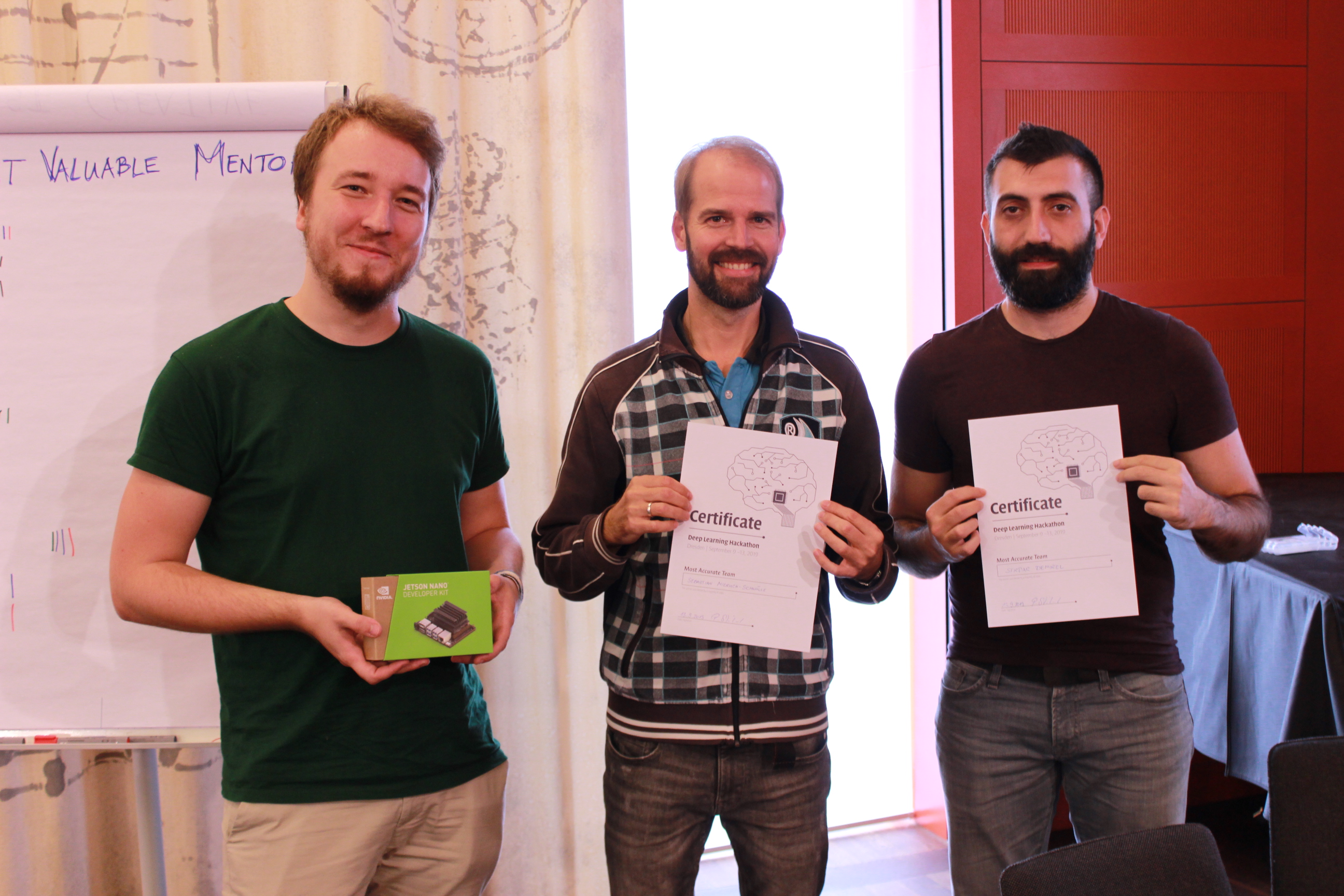 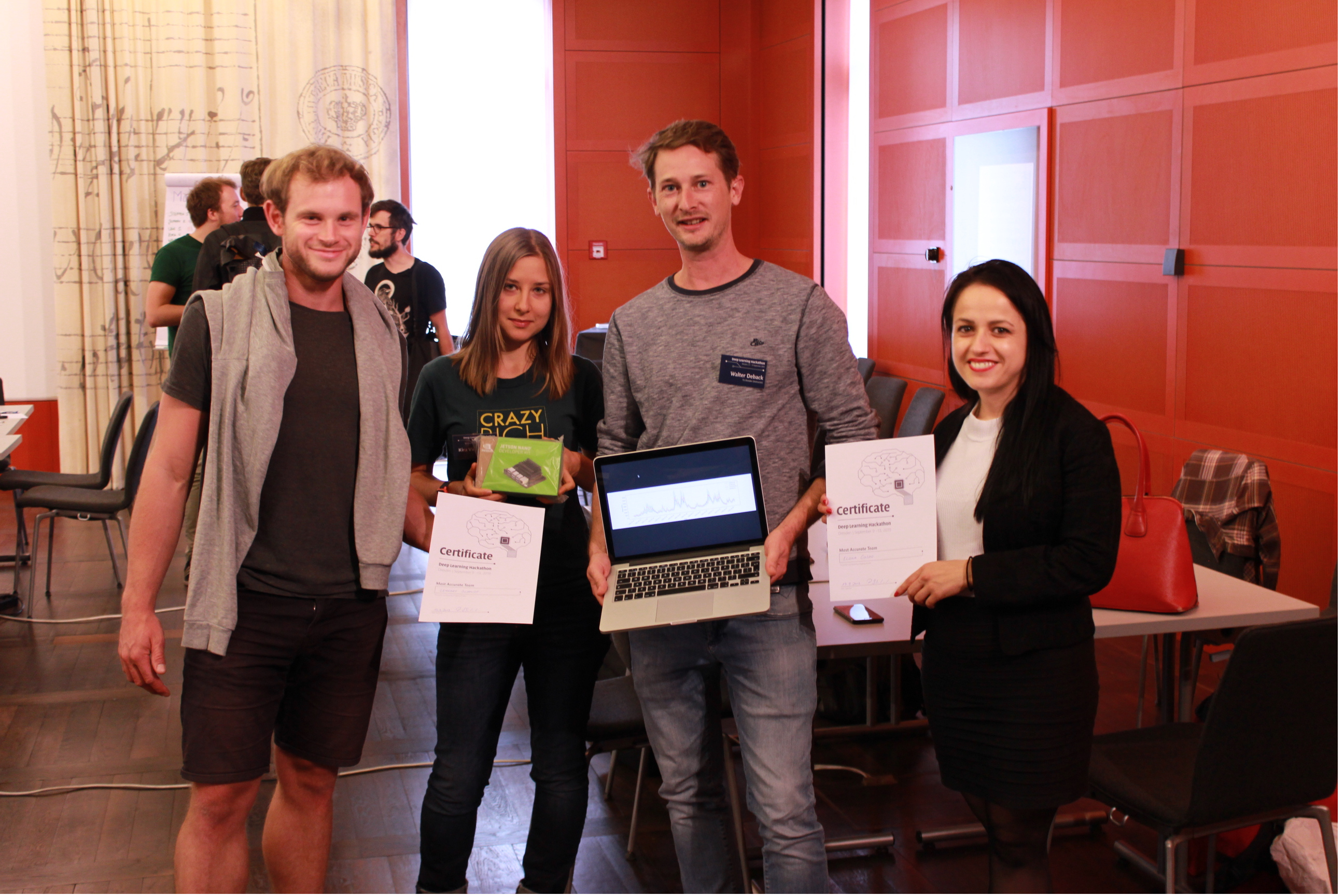 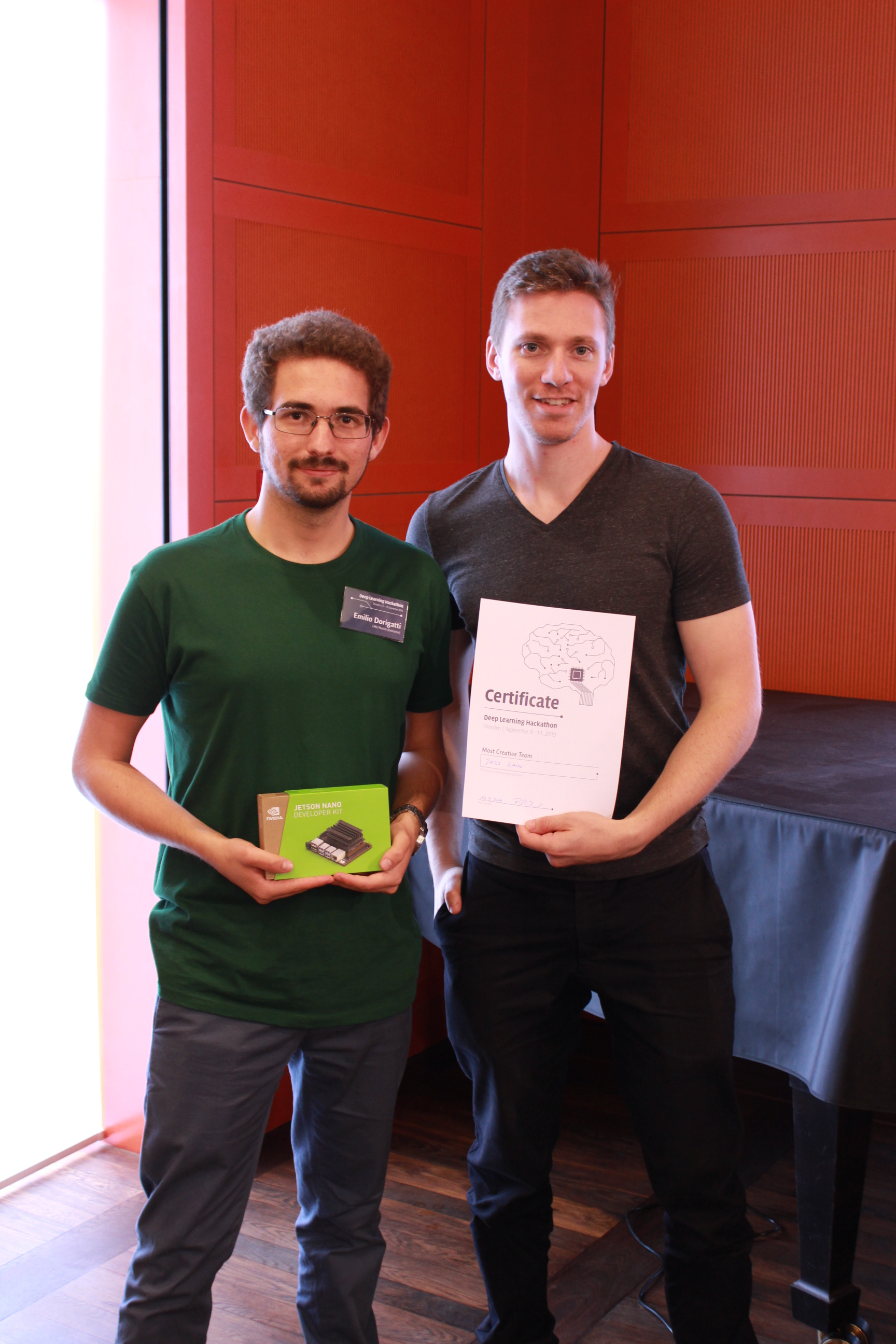 Our Team "The Explorers" currently works on text recognition in historic topographical maps. This is a challenging OCR Problem due to the similarity of foreground and background (same color, similar shapes, etc.) We would like to achieve an improved recognition rate and, more generally, get insight into image analysis problems with similar foreground/background textures. The program has been developed by our trainee Niklas Werner under the supervision of Rene Jäkel and Peter Winkler.

We target the task of Optical Layout Recognition (OLR). That means we want to segment scans from book pages into their layout-semantic components for example paragraphs, headings, page numbers etc. OLR is an integral part of software for Optical Character Recognition​ (OCR) and is usually implemented as a set of heuristics based on filters and graph algorithms (operating on connected components). The results are rather unsatisfying for complex layouts. We would like to evaluate how machine learning can help to improve a) the robustness and b) the granularity of OLR results which in turn might also lead to better OCR results.

Up to now the quality control (QC) of ocean measurements is a time-consuming, manual process done by oceanographers, which will not be feasible anymore in the future due to the increase of data acquisition. The aim of our project is the automation of QC using Artificial Intelligence, where we have started promisingly with deep learning neural networks. We have access to a global ocean dataset including millions of already QC'ed samples from parameters like temperature, salinity, nutrients and more, ranging back to the 19th century until now. We hope to learn at the Hackathon how to optimize our algorithm, e.g. the architecture, input features, missing data etc. to develop a skillful and usable application for automated QC of ocean data.

The goal of our application is to predict multiple fluorescence labels and cell structures from brightfield input images in human lung tissue, as we study infections in lung tissue. Due to automated microscopy, we have a rapidly growing number of microscopy images to analyse and we need, alike many other biomedical research groups, an application that is able to automatically label cell structures from brightfield images to avoid the laboriously process of fluorescence staining in order to save valuable time and costs, and to allow for otherwise not possible research approaches.

Our project attempts to increase the possible effective volume of physics simulations for the Belle II experiment by predicting early in the simulation procedure how useful the given simulation is likely to be for a particular physics analysis. Limited by computing resources, the existing simulation methods are too slow for the number of simulated events required in planned physics studies, while most of the simulated physics events are trivially identified after simulation as being not useful for the given study and discarded.

Our application is aimed to be a key part of the research area of integrative omics analysis. We aim to combine radiological images of lung tumors with genetic information of these tumors to improve the classification of these cancer subtypes. We hope, that our work at the hackathon provides a workflow which uses images and gene expression to stratify patients based on machine learning.

The Belle II experiment is a particle physics experiment located at the SuperKEKB electron-positron collider in Tsukuba, Japan. It is designed to produce B mesons and measure their subsequent decays. An essential technique employed by the experiment is tag-side reconstruction, in which one B meson is reconstructed and the remaining B meson is measured in a decay of interest. We are aiming to replace conventional algorithms with a deep learning alternative. Therefore, we are using self-attention networks to reconstruct the decays of intermediate particles produced in the decay of B mesons. We plan to extend this to reconstructing a full B meson decay chain.

Grazing-incidence small-angle scattering (GISAS) is a powerful technique to study properties of thin films containing nano-size objects. One of popular applications of this technique is in-situ study of thin film growth from atomic deposition. The main disadvantage of GISAS is challenging data analysis. Experiment at a modern synchrotron produces thousands of images. Manual analysis and fitting of those can take years. The aim of our team is to develop and train a DNN which would provide user with a fast feedback on morphology of the growing film.

Our application is aiming to forecast streamflow of the Elbe river close to its delta to the north sea in Germany from raster datasets of interpolated observed precipitation and air temperature using a CNN-LSTM structure. The project is of significance from multiple perspectives: For one, the Elbe has been subject to hydrological extremes in the recent past like severe floodings in 2002 and 2013 and severe drought conditions in 2018. Thus, the Elbe is the focus of several hydrological research projects to investigate flood generation mechanisms and improve prediction of hydrological extremes.

Our application is intended to be used as our Camera Perception Pipeline for our formula student driverless car. The idea is to develop a fasterand more accurate version which incorporates the distance estimation into the neural network instead of using the pinhole model.

Your browser is out of date!

Update your browser to view this website correctly. Update my browser now